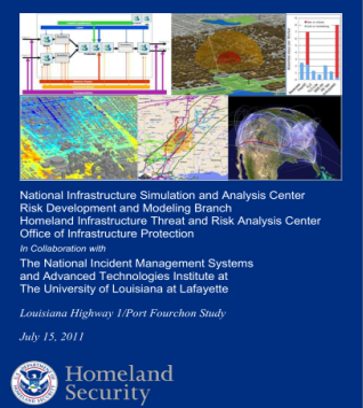 This study was conducted to provide an assessment of the national consequences of disruptions to LA-1. The study evaluates the reduced ability of the nation to deliver two critical commodities (crude oil and natural gas) to the American public as a result of the loss of LA-1. The study also addresses local, regional and national economic impacts due to a disruption of LA-1 for an extended period of time.

This study has been prepared, in collaboration, by the National Infrastructure Simulation and Analysis Center (NISAC) and the National Incident Management Systems and Advanced Technology (NIMSAT) Institute located at the University of Louisiana Lafayette. NIMSAT’s effort was funded by the LA-1 Coalition, a group that is a proponent of enhancing LA-1 to make it less likely to be disrupted.

The NIMSAT Institute at the University of Louisiana at Lafayette developed a Fuel Demand Estimation model for the Louisiana’s department of Natural Resources. The fuel demand and evacuation traffic to a large extent relies on the behavior of evacuees; therefore it is imperative to study some important behavioral factors during evacuation. The NIMSAT Institute in collaboration with the department of Sociology at the University of Louisiana at Lafayette has conducted a survey to understand the evacuation behavior on various coastal parishes in the state of Louisiana between October 2010 and December 2010. This report provides a summary of the survey results on how, when and where people have evacuated in the past, how many vehicles they took and how many gallons of fuel they filled up for four major hurricane tracks.

The Evacuation Fuel Demand Model (EFDM) discussed in this report provides an overview of the methodology, analysis and preliminary results for estimating evacuation traffic and fuel demand. Among many different analysis required for developing this methodology to estimate
fuel demand, the evacuation model is probably one of the most important components. The discussed approach brings together inputs on the hurricane track and intensity, the evacuation transportation network, evacuation population and their behavior, fuel demand estimation
from evacuation traffic. A discussion on the results of expected fuel demand for the model and how it can be applied during an evacuation scenario is discussed through an example evacuation scenario for hurricane Gustav.This report also discusses our investigations approaches to obtain situational awareness through real-time traffic monitoring from Automatic Traffic Recorders and video cameras. 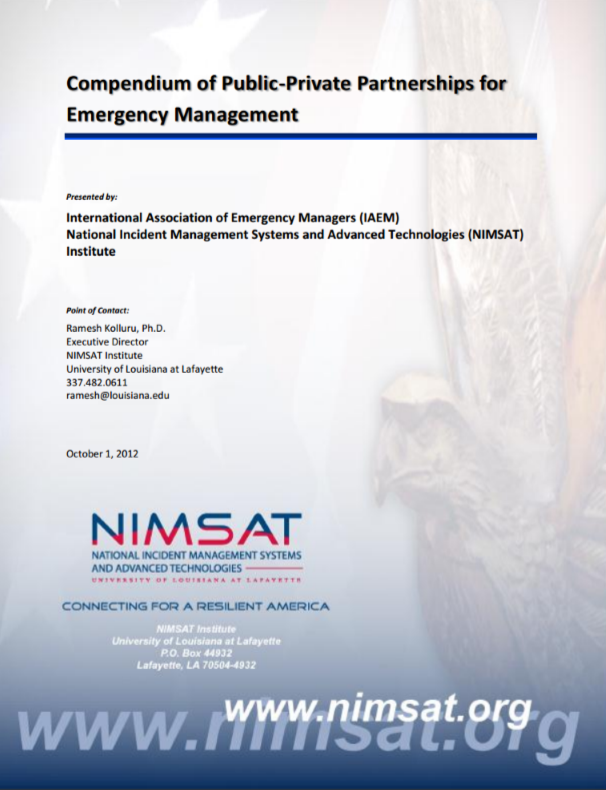 The Public- Private Partnership Compendium is a collaborative effort between the International Association of Emergency Management and the NIMSAT Institute.

Researchers at the NIMSAT Institute conducted a nation-wide survey of emergency managers and homeland security professionals, including information on Federal Emergency Management Agency’s (FEMA) public-private-partnership (PPP) models collected through the Private Sector Division office. The report examines the common threads of successful models from communities of various sizes that have launched government-industry collaborations that help them better prepare for, respond to, and recover from all types of emergency events. This compendium hopes to assist emergency managers across the nation solve common issues and create solutions to challenges, while integrating the business community and other private sector stakeholders.

In 2011, Daniel Stoneking, Director of the FEMA Private Sector office, announced the development of the Publicly Accessible, Dedicated, Resourced, Engaged, and Sustainable (PADRES) framework as a tool to evaluate the important dimensions of an effective public-private-partnership at FEMA’s first national conference, “Building Resilience through Public-Private-Partnerships” in Washington DC. The report follows this matrix as a guideline to evaluate the partnerships. It is germane to know the PADRES framework, while appropriate for most PPPs, is not a one-size-fits-all solution for every situation